Kevin Barry's guitar parts marked the end of the scheduled recording sessions.  A few decades back that would have meant the process was near its end, since "mixing" an album was mostly about making sure all the parts could be heard.  But now, when multiple versions by each performer can be easily kept and edited together later and there are almost unlimited ways to alter the sounds, there's still a lot to do.

Mixing this CD took place over two and a half weeks.  In some cases--"Desert Stars" and "Why Do We Ask Why?" are good examples--the process really was simple.  Everyone's parts were well played and the focus was on making everything sound.  Although even here there were minor repairs, like stealing a great note or phrase from an earlier "take" of the song to put it in the final version  (or electronically moving the bass player's down-beat where he rushed it...oops!).

In a few cases, the mixing process revealed issues requiring more work.  In "Love in the Middle Ages," for example, we noticed that the drums, electric 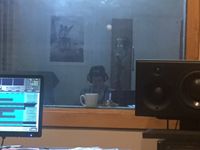 guitar, and bass guitar, which sounded fine individually, did not work together well.  In the end, it turned out that all it took was a re-recording of the bass part to fit in better with the later-recorded drums and electric guitar.  The bass part in "Every Wrong Thing" was re-recorded for similar reasons.

In a couple of other cases, Eric and I felt like a song was missing the fullness or musical development we'd imagined it having.  At this point, Eric stepped into the breach, taking a number of quick trips into the recording to lay down harmonies ("Every Wrong Thing," "Talk is Just Talk") or mandolin ("Down to the Waterfall") to fill the gaps or add the drama that was needed.

Perhaps the biggest testament to Eric's skill was that, in the end, every song sounded right--from the ones (like "Desert Stars") that sounded great from the moment they were played to those (like "Love in the Middle Ages" or "Every Wrong Thing") that I was worried would never come together.  All in all a very satisfying experience and nice way to end the recording process!