After an emergency root canal for Eric sabotaged our intended start date, I finally got into the studio for a full-day session on May 11, 2017.  The day was devoted to recording reference guitar/vocal tracks for all 12 songs, which meant first that I had to make final decisions on the speed, key, and structure of each song.  I had pretty good ideas for most of them, having made a demo CD of the songs at home (which someday will be worth millions, I'm sure).  But in several cases, Eric had good suggestions for changes (a couple songs went up a step or half step, a couple others sped up).  So in the end it took about three hours to get the reference tracks done. 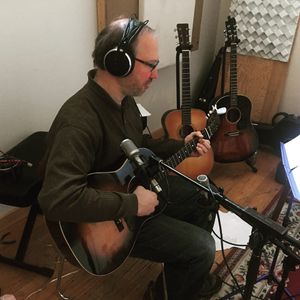 Then the fun part started, which was putting down finished acoustic guitar tracks.  Eric has a truly astounding collection of classic acoustics and a good sense of what will work for a given song, given the style of playing and the likely accompanying instrumentation.  In the end, a 2014 guitar by renowned local luthier TJ Thompson (which I'm told TJ made to replicate a 1931 Martin OM 28) was used for all the fingerpicked songs and a 1950 Gibson LG2 on most of the strummed songs, but a 1949 Gibson J 45 also made an appearance and a couple of others were tried on one song or another although ultimately didn't make the cut.  I kept at it until 6:00 and managed to get 7-8 guitar tracks done, although by the end it was all I could do to finger the chords (thankfully Eric's guitars are well set up with an easy-to-play action).  A great first day of work!